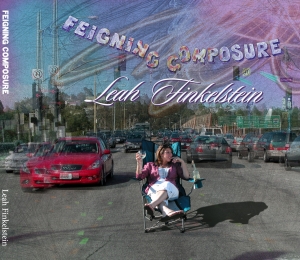 Leah Finkelstein was just awarded best singer/songwriter through an original song competition at the 2011 Malibu Music Awards. Her music has coined a new genre, American Roots Soul. She is the daughter of noted late jazz vocalist, Claudia Finkelstein of Joy Spring, and began her studies as a pianist at the age of five. When Leah was fourteen, she required more intense piano study and began to work under the tutelage of Alex "Coolie" Johns, a well-known jazz pianist and arranger from New England. Through his brilliant teachings, Leah learned all about jazz theory and the world of improvisation. Alex also booked her first gig at the age of fifteen with a jazz combo in Portland, Maine. Her proud mom sat in with them.
Leah studied at Wheaton College in Norton, Massachusetts, earning B.A. in Music Performance, with a focus on piano. She composed on a regular basis and performed on campus and around the area. After college, she lived in Boston, playing in many bands as a pianist ranging from rock to soul to R&B. She formed her own band, The Help, featuring her original music and had a successful run. Leah also played solo gigs in Florida, the Caribbean and New Orleans.
When Leah's mother fell ill in 2002, she returned home, continued to perform, and focused on spending time with her family. After Claudia passed in 2005, Leah had boom of creativity, composing what would become her next album, recorded by her husband, Kevin, a professional audio engineer. She formed another band that her bass player named Dear Claudia, after hearing Claudia's jazz recordings and knowing how close Leah was with her mom. Dear Claudia was extremely popular in Southern Maine, New England, and had a successful tour in NYC in 2007. The Dear Claudia album was also successful on the radio, and continues to be played on radio stations globally.

After receiving interest by Showtime for some of her songs, including Weird Day, she left her day job on the east coast as a social worker and relocated to Los Angeles with Kevin. Since moving to LA, Leah has been performing all over Southern California. She landed resident gigs at Smiles’ in Sherman Oaks, Michael’s in Burbank and Exotic Thai Bistro in Simi Valley, among other venues she has graced such as Hotel Café, Bellavino, San Manuel Casino, and private functions in Malibu.
Meanwhile, with several years under her belt as a social worker, Leah was drawn to the non-profit organization, Warrior Theatre, a performing arts center and support center for adults who were victims of childhood abuse. She connected with Mitchell Holden, the founder, and they co-produced and co-directed a play to raise awareness about the cause. Leah performed original work written for the play and Mitch also starred in the production. They continue to hold support groups for women with an abusive background who are also in the arts. Mitch and Leah also co-wrote a book detailing an approach to therapy designed for adults abused as children, created by Dr. Arlene Drake Ph.D., Chairperson of the Board for Warrior Theatre. Leah also provided the illustrations.
Given Mitch & Leah’s incredible ability to work on several projects together at once, Mitch signed on as Leah’s manager. He has placed her songs on several radio stations worldwide including a large market station (600,000 listeners) in Melbourne, Australia. Leah is being considered for placement on Warner Brother’s ‘[One Tree Hill.’ She is also currently in negotiation with DL Music, a music placement company, and also being considered for placement by an A-list director in Hollywood
Jill Tengan, the Senior Recording Engineer at RUSK Studios in Hollywood became a fan of Leah’s work after hearing her regularly at a resident gig in Burbank. Leah and Jill teamed up and produced her second album, “Feigning Composure”. Through this process, Mitch, Leah, and Kevin launched Def Cat Productions, a new production company and label, releasing Feigning Composure as its first artistic work.
Woven into the fabric of Def Cat is the idea of the social aspect of what brought Leah, Kevin, and Mitch together as working partners in the first place. Def Cat is almost the culmination everyone’s strengths under one roof. As the saying goes, ‘the whole is greater than the sum of its parts.’