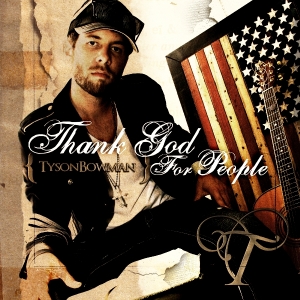 Reared in Erie, Pennsylvania, Tyson’s humble approach is cutting through the crowd of hopefuls with his latest album. Country music was a big part of his life and with musical influences of Alan Jackson, Garth Brooks and James Taylor, it is clear to see the rock ‘n roll image blend with his traditional country vocals.

Tyson spent his childhood singing in a church choir and dreaming of a life in the country spotlight. “My family always had a strong musical tie,” remembers Tyson. “My Mom used to book all the entertainment/performances at holiday parties at work and I can remember my parents saying their first date was going to a concert.”

With music abilities that continued to grow, Tyson’s teenage years found him rapping and beat boxing in a high school hip-hop group. “We performed locally around town and even had a chance to open up for American rapper, Ludacris.” After high school, he attended Mercyhurst Northeast College on a basketball scholarship and after realizing his love of music, he attended The Conservatory of Recording Arts and Sciences in Phoenix, Arizona. On graduation day, nothing held him back. He drove three days straight to where his heart was in Music City.

After arriving in Nashville, Tyson worked with vocal coach Renee Grant-Williams, who describes his voice as “down right pretty.” Always thinking of others, he founded “The Grand New Opry,” a take off of the traditional Grand Ole Opry, but provides upcoming musicians live performance opportunities.

Tyson’s songs reflect on lost love, living life without regret and enjoying the journey, not just the destination. “It’s all about taking risks,” says Tyson. “Take risks, go to the extreme, ask God for guidance, help others along the way, and as the great song says, Live Like You Were Dying.”