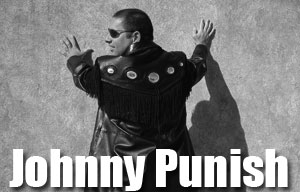 Former Front Man and Founder of the 90’s punk rock band Twisted Nixon, Johnny disappeared into the jungles of the America’s early in the 2000’s where he rediscovered the meaning of life.

He tried hub bubbin' with high societies in the Latin world only to find himself living amongst the filth and scum.

At night, all the animals came out and Johnny was there – whores, skunk pussies, federal agents, buggers, queens, fairies, prosecutors, dopers, judges, junkies, sick, and the venal.

As Johnny really wanted to find his own paradise, he always hoped that a real rain would come and wash all this scum off the streets. Johnny was desperate! He wanted freedom and peace! He went in search all over the globe.

He went back to the Bronx in the USA, back to Brooklyn, and plummed the depths of Harlem, looked under rocks in his teen-age home town of Las Vegas, traveled into the weird scenes of Europe and back down into the jungles of Mexico alledgedly hooking up with a witch doctor-ess in the voodoo infested village of Coba at the foot of a dead Mayan temple.

He traveled places far and wide. He didn’t care. It made no difference to Johnny. He was on a misadventure looking for Shangra-la; somewhere anywhere.

After years of wandering and meandering with sycophants, capitalists posing as aid workers, criminals, and misanthropes, Johnny declared that there was no Utopia.

However, through the muck, his voice did once again resurface albeit a bit raspy-err with a tinge of disgust. No longer a punk rocker but a beaten world renaissance worn and traveled man, Johnny is once again back in the artist saddle creating another portrait with a whole new perspective.

Jaded? Probably! Cynical? More than likely! Yet, its’ fresh, passionate and real. Johnny simple has no other way. “I can only express what I feel and what I see” says Johnny.

If you’re a fan of passionate rock and activism, get back on Johnny’s band wagon. Just remember to jump when it’s looking like he’s driving it off the cliff!