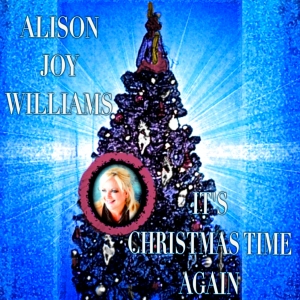 NSAI Member Hits #1
NSAI Member Alison Williams Hits The Blues Charts!
When Alison made her first trip to Nashville in January 2007 the
first thing she had on her To-Do List was go to NSAI and become
a member. Since making the move to Nashville six months after
that, Alison has spent a lot of time both writing and volunteering
at NSAI.
Alison recorded and released her first Nashville CD, Blonde Hair
Blues, in 2009 with all but one song either written or co-written
by her. Several of the co-writers on the CD she met through
NSAI.
In 2010 Blonde Hair Blues reached #5 on the Blues album chart
with AirPlay Direct, a leading digital distribution platform used by
indie artists and record labels to get their music to radio
programmers.
When Alison decided to record a new CD, she knew the best place
to find co-writers for the project was among the talented writer
members of NSAI. The CD, Love All Of Me, ended up being an
NSAI project since all but two songs were co-written with NSAI
members.
Love All Of Me was released March 1, 2011, and as of April, Love
All Of Me has reached the #2 spot on the AirPlay Direct Blues
charts thanks to downloads of her songs to radio stations all over
the world. She is the only unsigned artist in the Top 10. With
artists Buddy Guy, Greg Allman, Shaun Murphy and Marcia Ball
listed on this same chart, she's in very good company!
“I have NSAI to thank for all the wonderful things that have
happened in my career as a writer and artist since coming to
NSAI. The first time I walked in the door I was treated like I had
just walked into a family reunion. The advice and encouragement
the staff provides is beyond measure.”
Shereeʼ Spoltoree, NSAI E-News, April 13, 2011
www.NASHVILLESONGWRITERS.COM

Love All Of Her - Strum Magazine
Strum Magazine
Alison Joy Williams - Love All Of Her
Nashville, Tennessee isn’t primarily the place you think of when you hear about blues music. It’s
perceived to be the primary hub for country music. However, a broad range of genres does exist in this
small town. And there is one independent blues artist who’s prominent in the music scene among
Nashville’s community of artists and songwriters. Her name is Alison Joy Williams.
Growing up in southern California, and eventually Washington, Alison had been singing ever since she
was 9 years old. Surrounded by music almost her entire life, Alison learned to appreciate everything about
music. Though her influences ranged from artists such as Jimi Hendrix, The Rolling Stones, Glen
Campbell, Patsy Cline, and Johnny Cash to Motown and Jazz, it’s Blues that defines the true soul from
which Alison sings. Her sultry and emotional deliveries on stage capture audiences from the United States
all the way to Europe.
Alison’s father was a great impact on her while growing up. He and Alison used to sing along with the
radio often. In addition to family and friends, Alison’s husband remains supportive of her career. “He used
to love listening to me sing back in high school. After we married, I used to sing at home all the time and
make up songs and lullabies for our children. One evening he asked me, ‘Why don’t you find some place
to sing? Look for a band or something.’ It’s funny, even with the musical exposure I had as a kid, I was
never encouraged to really look at music as something to do as a career. My husband took me from the
little town I grew up in and helped me to realize other people might like to hear what I do. Because of the
places we have lived, I have met people along the way that led me to writing my own songs, moving to
Nashville, and encouraged me to record songs good enough to be heard on radio stations all over the
world. In all this, he has always been there supporting me, ready to listen to the next ‘best song I have
ever written,’ or making sure I had everything I needed before heading out the door for another show.”
Alison began writing poems and stories from the moment she learned to write. Later, her interests
expanded into writing lyrics and studying songwriting, which helped define her own musical and vocal
styles. Alison said, “I came to Nashville to become a better writer.” Her most recent album, entitled Love
All Of Me, was released in March of 2011. Nine of the ten tracks on the album were co-written with
various songwriters, and the other track written solely by Alison. She truly enjoys co-writing. As Alison
describes it, “Co-writing is like visiting, gossiping, and discussing the human condition with the song as a
bonus in the end.”
After the digital distribution of Alison’s current album, it climbed into the Top 20 of Airplay Direct’s
Blues charts within the first week of release. By April, it reached the Top 5 and eventually hit number one
during the second week. Her album remained in the Top 5 spot for over eight weeks, which introduced
Alison as one of the few unsigned blues artists to sustain this kind of chart position.
Alison Joy Williams is proud of how much she has grown musically and personally. Blues is a part of
who she is, and music as a whole becomes the fuel behind her fire. “I so appreciate anybody that listens to
my music. I sing just to keep breathing… I'm reminded almost every day that I have been very blessed in
getting to do what I do. This new CD was such fun to create and has already opened doors for so many
great things: performing in Europe, more radio airplay than I've ever had before, and now I have a
manager. I'm just really excited to see where it takes me next.”
Written by Lisa Giaramita
http://www.strummagazine.com/index.php?option=com_content&view=article&id=480:alisonjoy-
williams-love-all-of-her&catid=34:music

Love All Of Me review from The Blewzzman Peter Lauro.
OK, so you probably haven't heard of Alison Joy Williams just yet and that shouldn't worry her a bit. Ya see, with
a voice like this, and the talent she has for writing songs that's all going to change soon. She knows it, I know it
and you're about to know it.
"Love All Of Me" is he second release and except for "House Of the Rising Sun" on the previously released
"Blonde Hair Blues", all of her recorded music is original. On this project, Alison Joy Williams, on vocals, is
joined by: Gene Rabbai on keys; Bob Hatter on electric guitars; Ralph "Rocko" Friedrichson on bass; William
Ellis on drums; Donnie Skaggs and Scott Neubert on acoustic guitar; Max Abrahams on sax; Daniel "Goose"
Gossett on vocals; and Debra Thomas and Diana Kelly on backing vocals.
Had I thought of this line first - I don't get the blues, but the "Blues Sure Get Me", I'd be using it as my slogan. It's
a cool and truthful statement. Most of us blues fans really don't get the blues but yet the blues sure has got a hold
on us. Well written and well sung by Alison, great rhythm from Ralph and William and real good work out of Max
on his only appearance on the sax.
I'm a sucker for a soft, beautiful, love song and this one's just that. After reading the disc's liner notes, I know this
one is being sung to Dennis...who's gotta be one lucky guy. As she sultrily describes the perfume she's put on, the
outfit she's picked out and the way she's done her hair - all in preparation for her time with him - she knows he's
going to love it. After all, as Alison says...."I Know Him". With all due respect to the fine job the band's doing
behind her, this one's all Alison. She even had me lusting for a look.
The title track, "Love All Of Me", has all the sounds of a pop hit. Had this been performed by The Teardrops back
in the sixties it'd be a sure "chart topper". It features more great lead vocals along with superb harmony from the
back up singers and excellent slide guitar by Bob.
Although singing her original style of Blues is what she loves doing the most, Alison prides herself as a cross
genre writer and her country roots are evident on several tracks - one of which is "Let's Go To Bed". This
emotionally sung ballad is a duet between it's co-writers - Alison and Daniel and features soft, soothing guitar
work.
The fusion of the acoustic and electric guitars by Donnie and Bob is as superior as the keyboard work by Gene on
"It's All About Me". Along with outstanding vocal harmony between all the ladies, this one's another winner. As
soon as you get the chorus line down pat I'm sure you'll be singing aloud...... "It's Allllll aaaaaabout meeee".
A perfect blend of a Country/Gospel/Blues style song titled "I Only Cry On Sundays" is easily the discs best track.
Along with good support from Diana, the songs co-writer, Alison belts it out of the park on this one. If I had one
bit of advice for her it would be more and longer versions of this kind of stuff. She's got the chops and I want to
hear 'em. This is powerful, commanding singing at it's best.
Other tracks on "Love All Of Me" include: "Does That Make You Happy?", "I Don't Feel", "Hey Mister", and
"Wishing".
Along with the music, the lyrics and the singing, another thing that impressed me about this disc was the thank
you's in the liner notes. Most of them read like one long, annoying run on sentence but Alison did it with the
clever style of a song writer. Good job gal.
Peter "Blewzzman" Lauro
Blues Editor @ www.Mary4Music.com
Blues Music Foundation, BB King
2011 Keeping The Blues Alive Award Recipient

# 1 on Airplay Direct
Alison Joy Williams with her new cd Love All Of Me hit the top spot for down loads for the week of April 11 -17th. Currently holding at #2 for the month she has stayed in the top five since the release of Love All Of Me in March.
If you haven't downloaded all the songs from Alison's playlist, now would be a great time to grab another for your program.

Nashville Muse
Doak Turner editor of the Nashville Muse says " Alison Joy Williams is a gifted songwriter and vocal artist. Blonde Hair Blues is a great listen. Her rendition of House Of The Rising Sun is my favorite recording of this song.