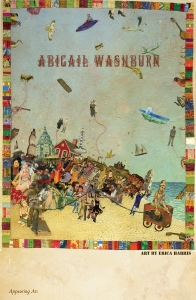 Back cover of the CD/ record please add:


Thanks!...
Tucker Martine, there is no brighter light, can you handle dis?
Kai Welch for being my star-crossed collaborator and bearer and bringer of greatness now and onward. This music would not be without you.
Jeremy Kittel- we took a chance and you conquered. strike that, slaughtered.
Kevin Dailey for the constant, compassionate ear and unwavering attention to detail.
Gary Pacsoza (& Brandon) for the unconditional support. blows my mind.
Erica Harris for your immensely inspirational art.
Ricardo Alessio for bringing all the bits together and making it shine.
Hanggai Band & Jerome Williams for taking time out of your own recording in beijing to rock the throat singing on BMS.
James Wallace & Jamie Dick, Carla Parisi, Molly & Tootie for lighting up the studio and making us dinner and making us laugh.
Nat Smith (Jenelle & Wayne) for driving from mississippi only to wait for your moment of pure perfection.
Rayna Gellert for the deep groove, stirring soul and dearest friendship.
Edgar Meyer for the unending support and inspiration.
Thanks to AC Entertainment (Ashley Capps, Carissa Stolting & Neeley Polka), O'Neil Hagaman (Cheryl Harris, Legina Chaudoin, Brandi Kemp, & Becky Dickey), Paradigm (Bobby Cudd & Josh Swann), Graffam Middleton (Tyler Middleton), Todd Steed & Annie Haslam, Carla Parisi & ROUNDER RECORDS for believing.
Fleck-Paladino clan, Tim & Rach, Annie, Jack, Owen and all my dear friends and family for your eternal love and support.
Mom & Dad & Gramma June - this record could not have happened without you!
Bela Fleck - o.a.o... all is more because of you.
This record is brought to you by the extreme generosity of Donald & Chrissy Washburn & June Carvell. If you like the music, would you please send Gramma June a thank you letter?

This record brought to you by the extreme generosity of Donald & Chrissy Washburn and June Carvell.


If American old-time music is about taking earlier, simpler ways of life and music-making as one’s model, Abigail Washburn has proven herself to be a bracing revelation to that tradition. She—a singing, songwriting, Illinois-born, Nashville-based clawhammer banjo player—is every bit as interested in the present and the future as she is in the past, and every bit as attuned to the global as she is to the local. She pairs venerable folk elements with far-flung sounds, and the results feel both strangely familiar and unlike anything anybody’s ever heard before. To put it another way, she changes what seems possible.

It seemed just as certain that Washburn would study law in Beijing—she even had the plane ticket—as it seemed far-fetched that she’d be offered a record deal when she wasn’t looking for one. And yet, half a decade back she emerged without a law degree, but with a debut album, that album being Song of the Traveling Daughter. Alongside old-timey originals that felt impossibly lush and light on their feet were songs she wrote in Chinese—she’s fluent—and even an instrumental that wove together an old-time banjo tune and with a traditional Chinese folk song: “Backstep Cindy/Purple Bamboo.” It was a new way of hearing both.

In 2008, Washburn and three virtuosic comrades—cellist Ben Sollee, fiddler Casey Driessen and three-finger-style banjo player Bela Fleck—presented Abigail Washburn and the Sparrow Quartet, a set of seemingly boundless compositions sprouted from seeds of American and Chinese folk. The album extended an imaginative musical bridge between East and West. The world had never seen a chamber ensemble, stringband or bluegrass group quite like the Sparrows.

City of Refuge—releasing January 11, 2011 on Rounder Records—is something completely different, even for her: a sublime marriage of old-time and indie-pop. “This new project,” she says, “incorporates what would’ve in the beginning of my career seemed like an unexpected move, but now feels like a really natural progression of working with people that reach into other genres and other spaces musically.”

With the exception of old-time fiddler Rayna Gellert—Washburn’s former bandmate in the all-female stringband Uncle Earl—her cast of collaborators is entirely new. Among them are Turtle Island Quartet’s Jeremy Kittell, who arranged the strings and played a small orchestra’s worth of violin and viola parts; My Morning Jacket’s Carl Broemel (pedal steel and electric guitars); The Decemberists’ Chris Funk (bowed and plucked dulcimer and guitars); atmospheric jazz guitarist Bill Frisell; veteran Nashville studio percussionist Kenny Malone; Old Crow Medicine Show’s Ketch Secor and Morgan Jahnig (backing vocals); Wu Fei, master of the guzheng (think of it as a Chinese zither); and the Mongolian stringband Hanggai, who managed to contribute ambient throat-singing from halfway around the world.

There are two particular new faces, though—one only new to Washburn’s orbit, the other new to the national music scene in general—who were with her every step of the way: producer Tucker Martine (The Decemberists, Tift Merritt, Mudhoney) and singer, songwriter and multi-instrumentalist Kai Welch, who she stumbled upon playing keyboards
with the Nashville band Tommy and the Whale.

Martine framed the album in an expansive palette of supple, modern textures, some coaxed from acoustic sources, others from the sort you plug in, and all remarkably harmonious. “I knew I wanted to go outside of the folk community that I was used to,” she explains. “He had worked extensively with people who do sort of go back and forth between the folkier elements and the more indie rock world.”

In Welch, Washburn found a co-writer and singing partner whose sensibilities, though they compliment hers, aren’t
the slightest bit old-timey—which is precisely why she wanted to work with him; Smart AM pop is his native territory. “There were song ideas that I took to him that I thought I would have a handle on myself,” she says. “But I just thought I’d try it out with him and see if he thought of anything right away, and in so many instances he really would have an initial instinct that was extremely beautiful and applicable to the songs. He would think of chord structures that were different than things I would usually think of.”

Believe it or not, you won’t find any songs in Chinese on City of Refuge. What you will find, tucked in among picked and sung modal melodies, are some songs with catchy hooks and grooves. “Burn Through” is one of them; Washburn even punctuates a line of the chorus with a playful pop nonsense phrase: “Hey, hey, hey.” The song’s sentiment is as uplifting as its sound: “It’s really supposed to be a song that makes a person feel powerful listening to it, that there’s a lot of possibilities.”

That could also be said of the album as a whole. Washburn relates, “I like the idea of City of Refuge, because it kind of feels like ‘Is this a place I can go?’ It makes the record into the city of refuge, in a way.” Delivering on the promise of its title, the album is rife with vignettes about people from all corners of the globe trying to find where they belong. The songs bear real hope; hope that’s in touch with reality and profoundly collective. “It really is so strongly about that, I mean, from the immigrant in “Dreams of Nectar,” to the rich girl trying to figure out how to be happy in “City of Refuge,” to “Last Train,” where a troubled soul is trying to figure things out, wondering if the last train will come and carry him home finally.”

Washburn may have abandoned the original plan of moving to China, but she’s spent a lot of time there, playing music, and, once in a while, recording. The “Prelude” to the album features a field recording of Chinese schoolchildren displaced by the Sichuan earthquake. Their temporary school was, as Washburn takes care to point out, their “refuge from the disaster.”

She’d captured those and other sounds—of kids singing their ethnic folksongs; of parents rebuilding their homes—in 2009 with Chinese-American DJ/producer Dave Liang, of Shanghai Restoration Project, and they’d fashioned them into a poignant electronic benefit album for the region, titled Afterquake. As big of an effort as that was, it’s one among many examples of her having just the right music at significant moments, here, there and everywhere.

At the request of the U.S. government, the Sparrow Quartet toured Tibet in 2006—something no other American band had done-and performed in Beijing during the 2008 Olympics. Recently, she played the prominent U.S.A. pavilion at the World Expo in Shanghai. And Washburn has regular collaborators in China: a group of women musicians from the China Conservatory—they haven’t yet named the band—and Hanggai. She’s been popular with the Brits as well, singing with the likes of Robyn Hitchcock, Richard Thompson and Led Zeppelin’s John Paul Jones, who produced the Uncle Earl album Waterloo, Tennessee. She’s no less sought out stateside; she played the Clearwater Concert—a multi-generational folk extravaganza celebrating Pete Seeger’s 90th birthday—sang Stephen Foster songs backed by the Nashville Symphony during the 2009 Americana Music Festival and has become a favorite opening act for Steve Martin and the Steep Canyon Rangers. Plus, she and Fleck still do shows as a duo; a meeting of the minds and banjos.

And why wouldn’t musicians of renown—a great variety of them at that—covet Washburn’s creative contributions? She expands horizons and makes the distances between people, cultures and musical styles seem not so very far after all.