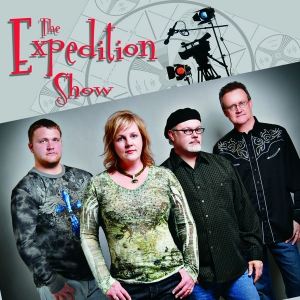 Consisting of Blake Williams on banjo and vocals; Wayne Southards on guitar and vocals; Kimberly Williams on bass and vocals; and Alex Hibbitts on mandolin and vocals; The Expedition Show has been a fan and festival favorite since their beginning in early 2002 as Williams & Clark Expedition. In the fall of 2009, the band underwent a personnel change, added Hibbitts, and changed their name to the Expedition Show. During the band's 10 year tenure, the entertaining group has been nominated twice by the International Bluegrass Music Association (IBMA) for Emerging Artist of the Year (2005 and 2007), Wayne Southards has won the International Acoustic Music Association's Male Vocalist of the Year award (2009) and Blake Williams has been nominated three times for Entertainer of the Year by the Society for the Preservation of Bluegrass Music of America (2007-2009). The band has performed all over the world including a tour with country music artist Darryl Worley to Japan as well as an extensive headlining tour in Canada. In addition, the band was invited to perform for the historic Ryman Auditorium's "Bluegrass Nights at The Ryman" concert series in 2007 where they played to a nearly sold out crowd. In between all the touring, the quartet also self-produced six projects, the latest being Brand New Set Of Blues. Through it all, the band has had one mantra they've lived and performed by...always entertain your audience.

"When we started this band, we wanted to be different from anyone else out there," stated founding member Blake Williams. "With Wayne and Kimberly both singing lead and harmony, we immediately offer a variety for the listeners and we also write a lot of our own songs. And another thing we wanted to do was to put on an entertaining show. When I worked with Lester Flatt back in the 70's, he made a point to call his performances a "show". Every time he stepped on stage, he set out to entertain and not just perform but give that audience a "show" and I learned very early on that if you can entertain a crowd, not just play to them, then you've done what you're supposed to do when you’re on stage." And entertain is exactly what The Expedition Show does. They not only present excellent vocals from solos to quartets, and excellent musicianship from the veteran players, but they also engage the crowd in laughter with the banter between Expedition band members and the country comedic style of Williams. "I've always thought if people were laughing, they're forgetting their troubles," continues Williams. "If you aren't smiling or laughing throughout our show, then we're not doing our job as entertainers."

With the band's success to date, the decision to take the next step and sign with a record label might seem a bit odd to some who have known the band and the business model they've followed. "We've always done everything in-house from booking to publicity and even putting out our own CDs," explains Wayne Southards, another founding member of the band. "It's worked well for us but a couple of years ago, we felt like we needed to take a step back and see what we hadn't accomplished, then figure out what we wanted to do next. With the addition of Alex and the energy he brought to our band, the name change and a fresh outlook for the group, we began thinking about actively pursuing a label." Soon after, Mountain Fever Records executives Mark Hodges and Sammy Shelor began talking with the group, resulting in signing the band to their label.
"I've been a fan of the Expedition Show for years and a fan of Blake Williams since the Flatt and Scruggs and Bill Monroe days," said Shelor

Mountain Fever Records will release The Expedition Show on February 28th. Available immediately is the first single from the project, "Backroads And Little Towns", written by band members Wayne Southards and Blake Williams. "We had a real dilemma when choosing the first single for this record," states Hodges. "The whole project is really great and offers so much variety with traditional and contemporary styles, original songs and standards, up-tempos and ballads, even a gospel quartet number. But we finally selected 'Backroads And Little Towns' because it truly represents what The Expedition Show is all about, down-home personalities, great picking and singing and wonderful, original writing."
33
What's This
Advertisement