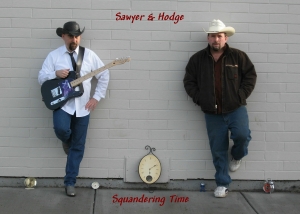 Purchase Sawyer and Hodge's CD "Squandering Time" on CDBaby.
http://cdbaby.com/sawyerhodge
$14.99 for 15 songs or $9.99 for Mp3 download in a zip file.
(click picture to go to Sawyer and Hodge cdbaby Site)

Sawyer & Hodge:
P.A. Sawyer has been a multi instrumentalist/singer/songwriter for over 35 years, performing and recording with many rock and country bands. Inspired by The Beatles, Brad Paisley, The Eagles, Gordon Lightfoot, Elton John, Brooks and Dunn, Five For Fighting, Rush, Kim Mitchell, and Marc Cohn. This eclectic combination gave him a rock edge with a melodic softer side.
In 2000 he built a home recording studio (P.A.Studios) in Chilliwack, British Columbia, Canada and started writing/recording his own rock songs.

In December of 2006, through an advert for P.A’s studio, he met up with Kevin Hodge who has been a poet and melodic country lyricist since the age of 16 and has won poetry contests across Alberta.
When the two met they started a writing partnership where Kevin wrote the lyrics and lyrical melodies and P.A. put music to them, played all the instruments, and sang all the vocals.
A kind of country rock version of writing partners Elton John & Bernie Taupin if you will.
The first song written was “My Father’s Hand” which is a compelling lyrical story of brotherly loss. Next came the quircky “Interest Free” and then the beautiful “Mama Said Me” which tells the story of a selfish mother/grandmother who sees the errors of her ways and tries to right the wrongs she has done.
Following those first three songs, the duo soon learned they had something exceptional and they began discussing doing a complete albums worth of material.
The final song list from these sessions is an extraordinary, fresh, original mix of acoustic country rock that needs to be heard.
Now they’re releasing the final outcome of their sessions with their debut CD entitled “Squandering Time”. A fifteen song adventure into beautiful lyrical stories and brilliant melodic acoustic/electric country rock.

Of Special Note: There is only One Musician on this album.
All the instruments were played by P.A.Sawyer: 6&12 String Electric/Acoustic Guitars, Slide Guitar, Dobro, Bass, Drums, Drum Machine Programming, Piano/Keys/Synth, Mandolin, Banjo, and all Vocals. The album was Recorded, Engineered, Mixed, and Produced by P.A.Sawyer at his Home Studio (P.A.Studios-Chilliwack, B.C.)

Sawyer and Hodge have decided to become full-time writers and have been churning out fresh, new melodic songs with substance non stop. They're now seeking a publishing deal internationally as they're very optimistic that someone will want to hear and cover these songs.

Currently they’re working on an amazing new second CD called "One Horse Town" to be released in winter of 2010.

Members of the S.A.C. (Songwriters Association of Canada) and SOCAN.