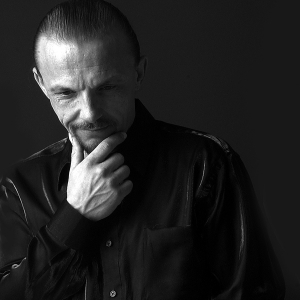 SASHA…
Sasha Lisnichuk has spent the past fifteen years creating a sound that is truly distinct. His formative years, spent in Kiev, Ukraine, were given to establishing a firm technicalproficiency on the classical guitar in a formal musical environment, as well as in the folk traditions of Eastern European, Middle Eastern and Gypsy music. He continued to cultivate his musical ear after moving to the United States by changing to the seven-string guitar and studying newer musical traditions from Brazilian Choro to American Jazz. The disparities between all of these very discrete folk music traditions blend seamlessly into his delicate musical acuity and inspiring virtuosity.
…with percussion…
In the second phase of the evolution of his music, Sasha developed the commonalities of his Slavic musical sensibility and the dynamic and range of percussion. A richness and breadth was given to every song from the taste of musicians steeped in the traditions ofpercussion from around the world. On a foundation of an extensive catalog of folk rhythms and sounds, largely from Latin America, Sasha has built upon these musical traditions with exceeding respect, augmenting their contexts while also enhancing his own musical voice.

…and chamber orchestra.
In the most recent chapter in the development of his music, Sasha has come nearly full-circle, merging with the roots of Western classical music from where he began. His "Suite for Seven Strings" combines the unmistakable sound of guitar and percussion with all the elements and charm of strings. The mastery shown in his orchestrations is evident in every piece, through an uncommon agreement of textures - those of Latin American percussion and classic string orchestra.