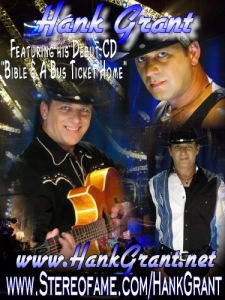 Hank Grant, born, Feb. 22, 1971, in Jonesboro, Arkansas was the youngest of three with two older sisters (Theresa and Tabatha).

Hank grew up in RedRock, Oklahoma.

When Hank was twelve, his mother bought an organ for the family home. Her love of music and family, brought hours and love, entertainment and family together. Singing and playing in the evenings after dinner...or just gathering in the family room on a weekend afternoon to reminisce and harmonize at the request of anyone in the family. A prodigy was in the making.

Now a single parent, with nothing to lose, it was 2005 when Nashville called his name, once again. He made the journey to the city and established his own welding business as backup and income.
With an army of songs that he, Hail and Younger had written, he teamed up with other great songwriters in Nashville such as Craig Wiseman, Hank Cochran, Mark Dreyer, Jerry Earl Laseter, Timothy Don Johnson, and James Dean Hicks. With Hail willing to invest, Hank went into the studio to record his first album Bible and a Bus Ticket Home , produced by Dreyer and Hail.

With the new album at hand, Hank finds himself performing locally around the Nashville country music scene. He has teamed up with his best friend, become manager, Monty Bailey (FASTRAX), an endeavor that Bailey considers, an honor .

(Quote by: Monty Bailey) The first time I heard this guy sing was a little over four years ago, and I think he had barely hit town at the time , said Bailey. By the time he sang the second verse of his song I was hooked (laughs). He walked off the stage and I said, I gotta meet this guy. The rest is history.

It's no secret that Hank and his mother, Marsha, had a very close relationship. Mother and son. Best friends. As he performs his title cut, A Bible and a Bus Ticket Home , there is certainly reminiscence of the first day he left home in Red Rock, Oklahoma and all that is beheld since that day.