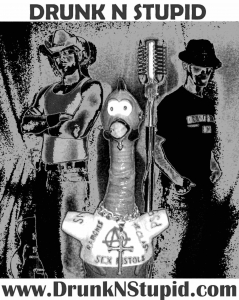 
DRUNK N STUPID IS MORE THAN A WAY OF LIFE,
IT'S A STATE OF BEING!
Quoted as being: "the most entertaining "DRUNK ROCK" band to ever hit the club scene in southern California" With songs like: Psycho Bitch, Park Life, Lost in a Bottle, Wood Morning, Drunk Love, Salt Malt, Grandmatramp, The Beer Song, Drunk and Stupid, Trailer Park Girl, Bite Me, I Drink I Am, Prick Tease, Liquor Barn Dave, No Glove No Love and many others, Drunk N Stupid will take you on a musical journey through the trailer parks of white trash America and far beyond.

Band Members:
The head preacher on guitar and lead vocals is RICHARD SYPHILIS. More rhythm and less weight than your standard white boy has a right to, he can actually play, move & puke out lyrics at the same time. Richard & Fred are long time partners in crime and have been known to wreck, pillage and ruin many a pub, village and woman.

The other guy in front is taking up all of the room behind them on drums and lead vocals is BILLY BIGSTICK (Peace Corp., Kickball, Swingin' Tikis). Raised on a steady diet of pizza, pasta, Keith Moon and Charlie Watts, he pounds and sweats for hours on end - usually on tempo but always on top.

On the bass guitar & vocals is cool guy & bassist extraordinaire STEVIE STINK FINGER. High atop many law enforcement most wanted lists, his bone shakin’ bass playing is second only to his love of BEER & BIG BREASTS.

Groupie duties fall on any bimbo who is sober enough to show up at the start a gig, 'cause nobody is ever sober at the end of one.