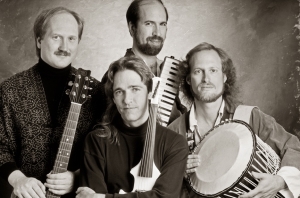 Formed in 1978, Ancient Future is the world's first and longest running musical organization dedicated to the mission of creating world fusion music.

The original members of Ancient Future studied with the master musicians of many world music traditions. They used their knowledge of world music to create something new and uniquely their own that is respected by pundits from the cultures whose traditions are a part of the mix. For example, according to INDIA CURRENTS, Ancient Future "plays with technical brilliance and gypsy-like fire," and their music "demonstrates the continuing beneficial influence of Indian music upon world culture."

Over the years, Ancient Future has expanded its musical vision through collaborations with master musicians from more than two dozen countries, cultures, and musical traditions who are now an integral part of what is today more than just a band. Ancient Future has grown to become a large multinational music ensemble with many smaller ensembles within it.

Ancient Future has released seven full length studio CDs selling over 150,000 units. Over a million samplers featuring Ancient Future on labels such as Putumayo and Narada have been sold, and more than one million Ancient Future songs have been distributed commercially on sites such as iTunes.

"Ancient Future is a rare kind of band that might simultaneously aggravate purists, confound New Age dilettantes, seduce skeptics, and dazzle just about everybody else. Delicious compositions, intricate arrangements, crisp playing and impeccable production put these ambitious voyagers in a league of their own." - Derk Richardson, SAN FRANCISCO BAY GUARDIAN

"Many artists have been running toward world music, trying to inject new life into their compositions. For most, it's a superficial exercise; but for Ancient Future, it's at the core of what this band has been doing since the late '70s. And the band traverses this fusion terrain with deft arrangements and beautifully wrought interplay." - John Diliberto, TOWER PULSE!
13
What's This
Advertisement