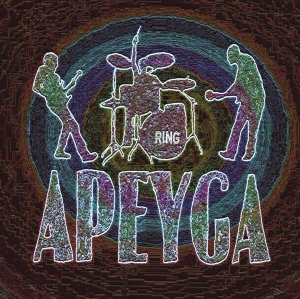 
The new album 'RING' is here for 2010! Long time Jazz-Metal instrumentalists, JOHN PELOIAN- bass, PETE PACE- drums, and JUSTIN PELOIAN- guitar, have created a 6 song masterpiece of modern sound that will raise your awareness of what can be sonically possibly with simply three instruments. Each song will blow your mind!

In 2003, brothers Justin Peloian and John Peloian formed the band APEYGA. They began to create songs based on musical ideas Justin had originated a couple years earlier in Graduate School. As the music began to develop, it was clear that the band's direction would be an Instrumental Fusion. In between singer songwriter, and stand up comedians, the Duo would plug the electric guitar and bass into the house P.A., and play their songs. The response was great, and they were asked to have their first show at the Rainbow Bar and Grill on Sunset Blvd. At that show, the sound-man, Jeff Justice asked if he could record them. APEYGA's first music was recorded as a guitar, bass Duo at Great Spirit Studios in West Los Angeles, California. This first EP, entitled "Instrumentals for Guitar and Bass", (track list: Waverush, Save Yourself, Slide) was then used to audition drummers.

In 2004 drummer Colin Popadiuk joined the band. With his back round in Punk and Math Rock, he added flare and soul-full drum parts to the Duo's songs. With their new Trio, APEYGA began to perform in Los Angeles and the South Bay. Within 6 months, and positive reviews of their shows, an L.A. booking agent asked to represent them, and they soon headlined small clubs in West L.A., as the only Instrumental band on the bill. With growing support, they recorded this set of music at Alan Gaffere's Hi Pro Studios in Torrance,Ca. APEYGA released their first full length studio album in October of 2005. (album track list: Distorted Redemption, Futurelife, My Soul In Gold, Afterhit, Am I Hip, Dead Clean, Timeworn, Eagles Return, Starved, Free) The self produced, self-titled album gained good reviews and established them as a defining element for the musical genre, "Jazz-Metal". Other terms used to describe APEYGA's music at the time were, "Punk-Fusion", "Aggro-Jazz", and "Nu-instrumental Rock". Justin and John soon began to write new music and audition drummers.

In August of 2005 they were fortunate to bring Drumeline expert and coach, Kyrt Hensch into the group. Within 2 months they were playing shows again extending their territory to San Diego, and were sounding better than ever. In February of 2006, a 4 song "Live Demo" was recorded in the well known Studio C at Paramount Studios in Hollywood, with engineer Geoff Gibbs.This Demo was used for promotion only, earning them online recognition and new concert opportunities. Playing to standing ovations and gaining a larger fan base, venues wanted the band to return to their stage. Then, in December of 2006, APEYGA
was voted the "BEST MELODIC AND INSTRUMENTAL BAND'" by L.A. based Rock City News Magazine. They soon began to put together the next album of songs that earned them this award. This time the music was self recorded and produced at their own studio in Culver City,California.

2007 marked the release of the album, "Forward". (Album track list: Pinstripe, Liberatus, Rise & Shine, Galaxies, The End of Reason, Traveler, 151) The Dutch Progressive Rock Review wrote:"The self produced disc shines with excellent sound quality and deft musicianship." Apeyga continued to perform this album in Southern California, with the addition of stylistic drummer Pete Pace (286, London After Midnight). In December of '07, the trio held their CD Release Party with a packed house, at the well known Derby in Hollywood. "Apeyga mesmerized the crowd at the Derby with their melodic yet pummeling riffs. Much to their credit, these guys are completely uncategorizable", declared Campus Circle Magazine's review of the show. "The dynamic sounds that come out of Justin Peloian (guitar), John Peloian (bass) and Pete Pace (drums) are nothing short of extraordinary."

2008 continued to be progressive times for the band as they began to experiment with new musical styles and auditions of band members. Greater guitar and bass effects were incorporated into the sound and compositions then began to take on new instrumental forms. This fresh, raw material was performed throughout clubs in Southern California, such as, the infamous Cat Club in Hollywood, The Joint, and Saint Rocke in Hermosa Beach. The guys gathered their fans feedback and, after this trial period of soul and sound searching was complete, they decided to remain an Instrumental Rock Trio, (consisting of Justin, John, and Pete). They collected their experiences and ideas, and created the 'Ring' album consisting of 6 new masterpieces of modern music (album track list: Clown, Silent Holiday, Oil & Oxygen, Android Asteroid, Jelly, Service of Sending).

Mixed by master engineer Todd Burke, produced by Justin Peloian, and Mastered by Grammy winner Gavin Lurssen, the 2010 Apeyga 'Ring' album has now been released for the world to experience!
0
What's This
Advertisement